Founded in 1989 by actor/writer/director Stefo Nantsou, ZEAL Theatre is an internationally renowned touring theatre company dedicated to producing original plays for theatres, schools and festivals. ZEAL has produced over 50 plays, specialising in exploring complex social issues for a broad range of cultural and ethnically diverse audiences. ZEAL's methodology blends live music, a rigorous physical theatre style and sees the actor as a multi-skilled story-teller. Their no-frills approach to theatre making and a consistent focus on telling contemporary stories with energetic passion has earned them worldwide success.

The Zeal ensemble spend the bulk of their time touring to secondary schools throughout Australia and have become a regular part of many high schools' annual program presenting a range of Zeal productions and offering masterclass workshops on acting techniques and group devising for drama students.

Zeal Theatre has been invited to present their plays throughout Europe, North America, Asia, South Africa & New Zealand, and have performed seasons at the National Theatre in London, The Duke on 42nd St in New York, Theatre Kazemoko in Tokyo and De Krakling in Amsterdam. The success of their touring regime and the critical acclaim of their productions has resulted in numerous collaborations with many international theatre companies including Teatret Neo in Denmark, Arad Goch Theatre in Wales, Kolibri Theatre in Hungary, TheaterHaus in Germany, Pacific Underground in New Zealand, Ellis and Bheki in South Africa, and Theatre Grimsborken in Norway.

ZEAL plays have now been produced in over 30 countries, with the ZEAL collaborators Stefo Nantsou and Tom Lycos having directed their plays in Canada, Denmark, Germany, Holland, Hungary, Norway, Turkey and Wales.

Based in Sydney, Zeal Theatre engages in long term relationships with numerous theatre companies and touring operators around Australia including Sydney Theatre Company, Regional Arts Victoria and Queensland Arts Council. Zeal has also been a regular resident company in a range of educational training centres and universities around Australia including NAISDA Aboriginal Dance Academy, Griffith University on the Gold Coast and Swinburne University in Melbourne.

ZEAL Theatre have received numerous awards for their plays throughout Australia and Europe and have nominated for a Green Room award in New York for their most successful production The Stones. In 2005, ZEAL THEATRE was awarded the prestigious ASSITEJ International President's Prize for "Excellence in the profession of Theatre for Children & Youth" in Montreal, Canada. ZEAL have three published books of plays; "The Forwards & The Apology" by Stefo Nantsou (PlayLab Press, 2009), and "The Zeal Theatre Collection" (Currency Press, 2011) & "Zeal Theatre Vol 2" (Currency Press 2018) both by Stefo Nantsou and Tom Lycos. Their play The Stones has also been published by Yale University Press in the U.S.A., and Sakyejul Publishing in South Korea. 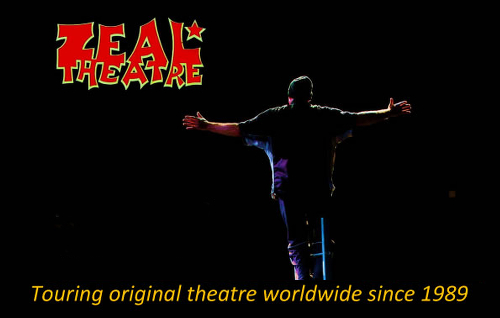 Some Zeal highlights include:


ZEAL THEATRE has won numerous awards around Australia and in 2005 received the ASSITEJ Honorary President's Award in Montreal, Canada for "outstanding services to the theatre for young people industry"

Currently Zeal Theatre has 4 productions in repertoire, "THE STONES", "KING-HIT", "LUCKY COUNTRY" and premiering in 2020 "MELTDOWN".

In 2020 Zeal will co-produce "TAMPA" with Norwegian theatre company Teater Grimsborken which will premiere in Oslo in December 2020 and play seasons in Australia in 2021.