Zeal Theatre has been involved in numerous short and long term residencies in a range of schools, universities and with many international theatre companies. Zeal residencies give drama students an opportunity to create and perform in their own show under Zeal’s mentorship, learning a range of theatrical skills, research and writing techniques and the buzz of being involved in a play of their own making. 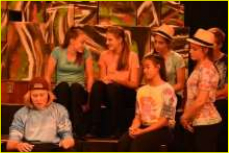 STRAW HATS, THONGS AND TOOTHBRUSHES
created and performed by Winmalee High School’s drama cohort, directed by Madeleine Sheehy & Zeal Theatre, played a sell-out public season in the school hall. Dealing with the aftermath of the community’s bush fires of 2014, the highly acclaimed production won a NSW Premier’s Resilience Award and was short listed for a National Community Arts Prize.


Zeal’s residency programs can take many forms with a range of outcomes.

Cost for short or long term residencies are negotiable depending on preferred outcomes, duration of residency and budgetary constraints.